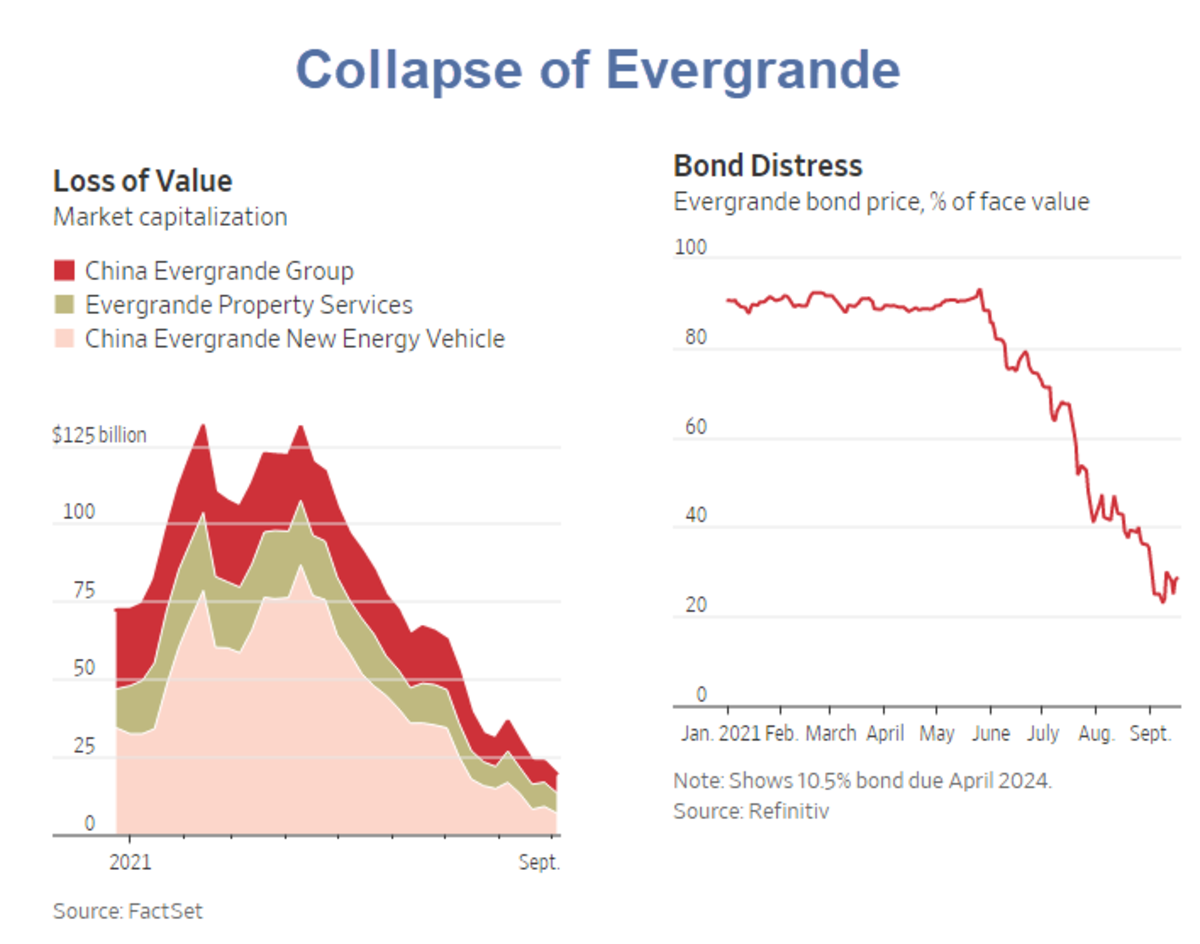 Evergrande is a powerful Chinese real estate company founded in 1996 by billionaire Xu Jiayin. In recent weeks, the company has announced liquidity problems and the suspension of its operations on the Hong Kong Stock Exchange.  It has debt of more than $3 billion USD, which is around 2% of China’s GDP.  To further get a grasp of its reach – the company manages more than 1,300 projects in 280 cities in China, generating more than 220,000 direct jobs and another 3,800,000 indirectly.

It’s reported problems have generated a lot of uncertainty in international financial markets and fears of a domino effect. Could the ripple effects from the possible fall of a major Chinese real estate company have a major impact in Colombia?. This article will investigate those potential risks and look ahead to what could be expected for the global economy.

China has a huge market of more than 1,3 billion inhabitants and has the second largest economy in the world (after the United States).   The panic that has been generated by the possibility of a financial crisis is not without precedent – it has been compared to the 2008 collapse of Lehman Brothers which sent global markets into a deep recession.

Evergrande is one of the largest real estate developers in China, with 12,000,000 homes built to date. It is based in the city of Guangzhou in southeast China.

The company is part of the Global 500 Fortuna index, which means it is one of the largest corporations in the world.

It is estimated that has annual income of $73.15 billion USD a year. Currently, Evergrande has investments in areas such as vehicle manufacturing, tourism, health, among others.

What happened so that Evergrande is on the verge of collapse due to a debt equivalent to 2% of the country’s GDP?. For some analysts, the critical situation facing China Evergrande Group is due to several factors, including:

*Contraction in the sales of a large part of its real estate projects.

*The company has adopted the strategy of selling its properties at a discount of up to 30% to increase its cash flow and thus be able to meet its commitments.

*The scale of Evergrande’s ambitions was staggering. The group resorted to loans, not only for its real estate portfolio but also to enter the business of manufacturing electric vehicles, sports and theme parks, food and beverage business. Furthermore, in 2010 they bought a soccer team, which is now known as Guangzhou Evergrande.

To meet its expansion objectives, the company issued bonds to obtain liquidity, which it is now unable to repay. Lack of payment generated panic in the Hong Kong stock market and led to a fall in the value of the stock by more than 89%.

SEE ALSO – What Has the Response Been? Evaluating the Colombian Governments Handling of the Coronavirus Crisis

The Chinese Government Begins to Move

The Chinese Government has begun certain actions to mitigate the impact of the Evergrande crisis. The Central Bank announced the injection of more than $17  billion to the financial system to encourage liquidity and consumption in the country. In the same way, it has demanded behind closed doors that the directors of the company face the commitments with individual investors with priority. Thus it is unlikely that the regime presided over by communist leader Xi Jinping will simply sit on the sidelines if the Evergrande effect continues to damage the country’s economy.

Some analysts believe that the Chinese government has started too timidly with a rescue plan for Evergrande. In recent weeks, it has suggested that governmental agencies and real estate developers acquire company assets. In this way, the government has indirectly helped reduce pressure from creditors. Evergrande also recently sold 19.93% of its stake in commercial bank Shengjing Bank, an operation worth more than $ 1.5 billion.

For years there has been a  trade “cold war” between the United States and China. China hopes to be the world’s No. 1 economy in the coming decades. So the failure of Evergrande and its effects on the economy could be a major thorn in the side for Xi Jinping and his ambitions.

Another area of tension is the situation of Taiwan, a rebellious province partially recognized by some small countries.  The possibility of a Chinese military invasion of the island of Taiwan has generated tensions between the United States and China.

BEYOND CHINA: What Impact Could The Evergrande Crisis Have Worldwide?

Some financial analysts have written that they think the impact on developed economies will be negligible, since Evergrande concentrates most of its business in China, which would limit the effects worldwide. The most important repercussion is the loss of confidence that would become general among emerging markets and the real estate sector in general.

In recent years, China has sought to strengthen friendly and commercial relations with Latin American countries. Their efforts are a clear challenge that seeks to reduce America’s influence in its own backyard. This has not much pleased the governments of the United States, which for their part are closely following these developments.

China has certain economic ties to various countries in Latin America. However Colombia is not high on that list.  Countries such as: Argentina, Brazil, Bolivia, Ecuador, México, Perú and Venezuela, maintain a certain economic dependence or business with the asian giant. They are places where an Evergrande collapse is likely to raise more concerns. Colombia, being the main ally of the United States in the region, has maintained a fairly low levels of trade with chinese companies and only in some sectors such as public transport has it begun to open businesses.  Therefore, any ripple effect of an Evergrande collapse here in Colombia is likely to be felt to a lesser extent. Still, as a player in the global economy, it could be affected by more widespread chaose in international markets.

The growth of the real estate sector in Colombia has been sustained and is a pillar of the post-covid-19 economic recovery.  In May 2021, a record number of more than 15,082 residential units were sold, the highest figure obtained in nine years.

When analyzing these statistics, we observe that 10,862 properties sold were of social interest, which is equivalent to 72% of the total. This shows that the subsidy policy of the Colombian government has allowed thousands of people to buy a home. Detractors of this policy might point out that the Government is artificially inflating the housing market with these subsidies. Regardless, it is clear that housing remains a priority to both regional and national governments and the strength of this sector is aided by international investment, along with the aforementioned subsidies.

A Nation At Peace Seeks Prosperity

Colombia signed a historic peace agreement in 2016 which brought an end to the country’s long running Civil War. Officially signed on September 26, 2016 with the Fuerzas Armadas Revolucionarias de Colombia (FARC), it ended more than five decades of violence and terrorism. After the end of the war, the country has evolved towards prosperity. So the opportunities to get better jobs and run successful businesses are allowing more and more people to achieve their dream of home ownership.

Many young, professional, newlywed couples are buying properties more easily. Some people with capital are taking advantage of the current moment by investing in properties to rent them, generating a recurring flow of money. Finally, there is a growing phenomenon of expatriates from all over the world arriving in cities such as: Bogotá, Barranquilla, Cali and Medellín, etc. due to the attractive advantages that Colombia offers to live as a foreigner.

At the end of September 2021, 170,797 homes had been sold in Colombia, which represents 48% compared to the same period of the previous year. Obviously the pandemic has a major part to play in those #’s, but its worth keeping in mind that Colombia was very closed down for much of the first four months of 2021 as well. Actual data and forecasts for the housing sector remain strong, in spite of the global uncertainty created by Evergrande’s troubles.

Additionally, if there is an economic slowdown in China and other countries, the decreased demand for raw materials could be a positive factor for the Colombian real estate market as it had suffered from high costs of inputs such as steel and iron and these expenses may become more manageable in that case, which would only spur more investment.

Predictions About The Price of The Dollar in Colombia

An important indicator to measure the health and confidence of the Colombian economy is the value of the Colombian peso. In the second week of August of 2021, it briefly surpassed 4,000 to 1 USD. More recently this has come back down a bit, but it still remains above historical levels. Investors with USD or Euros can invest in Colombia and get much more out of their investment than 2, 5 or 10 years ago. Recent news from the Colombian National statistics department shows that in July the economic growth of the country as 14% (annualized) and JP Morgan raised the country’s GDP growth forecasts to 9% for this year.

For this year 2021, Medellín has positioned itself as the second city that presents the largest offer of properties for rent and sale.

The construction sector in Antioquia is one of the most important engines of the economy.  Representatives of the Cámara Colombiana de la Construcción of the Department of Antioquia, have reiterated that the recovery of the real estate sector in the region has been leveraged on projects of social interest. The national government has continued with the policy of helping thousands of poor people with subsidies, encouraging the purchase of properties. Additionally, they point out the drop in interest rates that encourage people to seek financing from local banks. Therefore, new residential real estate development projects are emerging mainly in Medellín, Belen, Envigado, Itagüí, Sabaneta and Oriente Antioqueño. Thus, financial institutions and developers are being more competitive to provide the best options to potential clients.

No Cause For Concern - Yet

Given the immense size of the company and the sheer value of its debt obligations, the struggles of Evergrande have created significant unease in investors around the globe. While the world is certainly very interconnected, Colombia’s links to China are far less than other regional countries and therefore any major hiccups in China’s abilities economically will be felt less in Colombia than elsewhere. Furthermore, in spite of the economic toll of the pandemic, housing data in Colombia in 2021 remains very strong – evidencing an impressive bounce-back from a dismal year for sales in 2020. Astute investors should of course be aware of any developments regarding Evergrande and its ability to pay its debt obligations, but also need not be overly concerned about a doomsday global economic collapse that could result.

Get in touch today to talk about investing, Paisa culture, life in Medellín, or more (+57) 317-523-3469 or david@premiumpropiedades.co