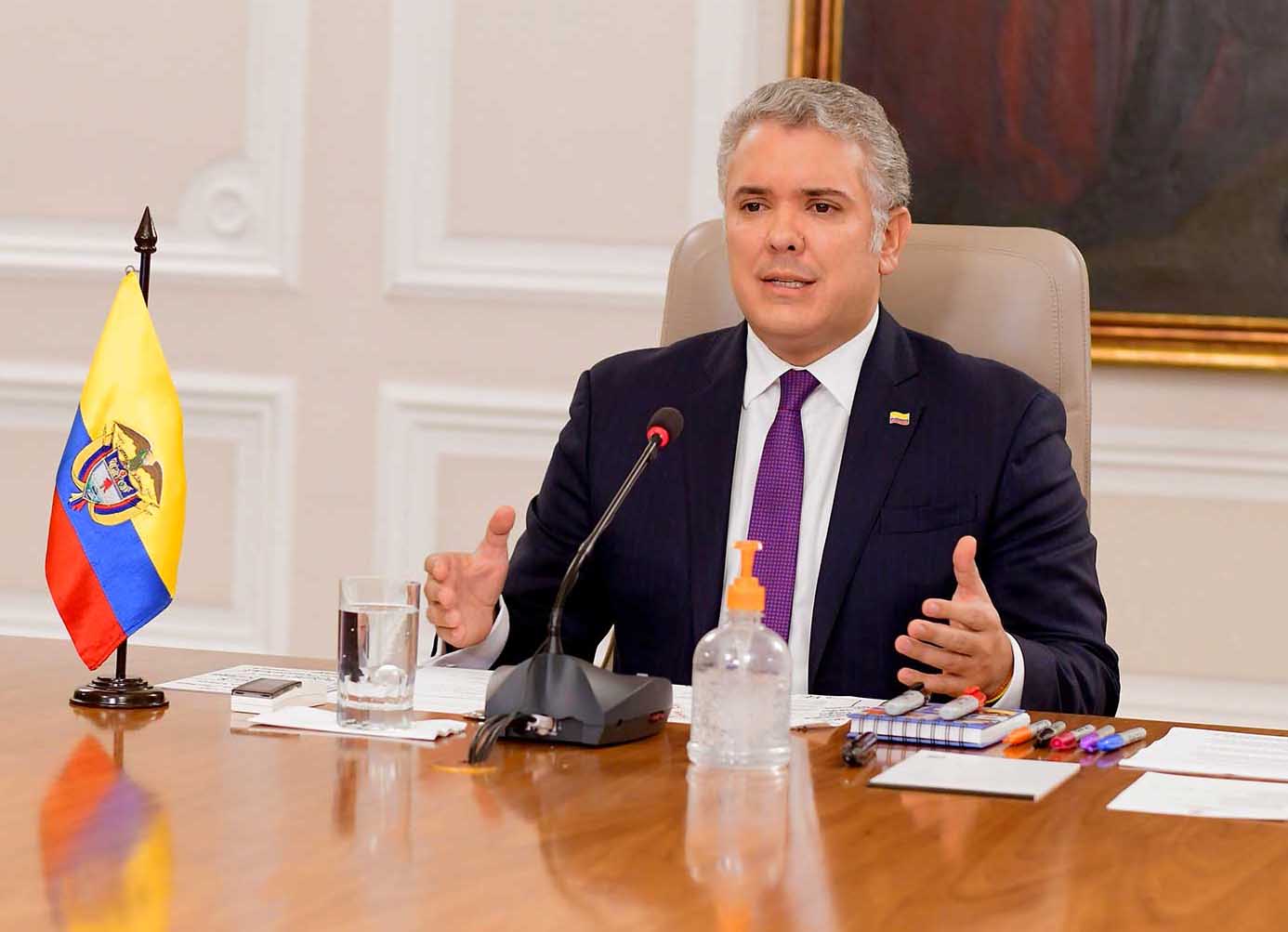 In November 2019, back in the olden days when mass gatherings were still permitted, hundreds of thousands of Colombians took to the streets in major cities across the country to protest a litany of causes, but primarily against a President that was hugely unpopular. With an approval rating percentage in the low 20’s at the time, President Ivan Duque was loathed by many, for a variety of causes – threats to reform the pension system, economic stagnation, and a refusal to implement the Peace Agreement with the Farc being among the concerns most vocalized.

While dissent undoubtedly lingers, Duque has, like many world leaders, benefitted from this crisis politically due to a sense of national unity. The presence of a silent and invisible enemy, the novel coronavirus, which threatens the livelihood of so many has brought together warring factions and made political divisions of the past seem trivial.

The first coronavirus case on Colombian soil was registered on March 6th, and now, more than three months later, cases are about to pass 50,000. The numbers change so quickly that in just a few days the reports in this article will be obsolete. For updated information about the Coronavirus situation in Colombia, see the ongoing coverage provided by the Medellin Guru. In comparison with other countries in the region, Colombia has acted quicker to prevent the spread of the virus and is reaping the benefits of that through a relatively flatter curve – at least for now.

WHAT HAS THE GOVERNMENT DONE?

The actions by the Duque Administration have undoubtedly been drastic. Those living in the country have noticed a severe change in their daily lives. The following is a list of the major changes ordered by the Federal Government.

With all of these restrictions implemented within two weeks of the first case on Colombian soil, President Duque has been praised for taking decisive action that may have prevented an exponential rise in cases. While the fierce scrutiny of last year’s protests has quieted considerably, the Colombian leader still has his naysayers.

In the days following the announcement of the nationwide lockdown, the Government issued a decree specifying the exceptions to the lockdown. Exceptions for essential workers, for police, for the army were enumerated – but the list didn’t stop there. A total of 34 different exceptions to the lockdown were identified, leading people to question of the lockdown would be strict enough to achieve its desired effect. Local government’s quickly noticed the inefficacy of allowing anyone to leave on any day to get groceries or run financial errands, which is why the Pico y Cedula system was implemented.

Now, depending on the last digit of your Cedulá, there are specified days when you are to complete those errands, or risk being fined. The fines are not insignificant either, totaling 932,000 COP, which is more than one month’s minimum wage. That equates to a fine of approximately $1450 USD in terms of local purchasing power. While citizens that pay the fine within five days will have it reduced by 50%, the amount is still substantial for many, which can work as an effective deterrent for non-compliance.

Another criticism leveled at Colombian authorities in the early stages of this crisis was a lack of coordination between local, provincial and national authorities. Bogota was considering a “simulated lockdown” of just 4 days, for the long weekend beginning March 17th, and the Medellin Mayor and Antioquian Governor held a joint press conference and announced that they would do the same. However, just a few hours into the beginning of the four-day lockdown, the national Government superseded the lower-level governments with the announcement of the (now-extended) 19-day nationwide lockdown. Citizens were left wondering why the responses between the national government and its largest urban centers couldn’t have been more properly coordinated.

As Government’s around the world continue to offer economic relief to their citizens through a variety of means, many expats may wonder what the Colombian Government is doing to ensure that its citizens can survive these prolonged periods without economic activity.

The primary support system is called Devolución del IVA. IVA, which stands for Impuesto al Valor Agregado, is a value-added tax charged at 19% on the purchase of many common goods. The Government uses money raised through IVA for many different sectors of the economy. Recently, through Decreto Legislativo 535 on April 10th, the Duque Administration outlined how this money will be used to support the most vulnerable in Colombia society. Through the SISBEN system, Colombia Mayor, o Familias En Accion (other social support systems in place before the crisis), those with an extreme need can register and receive between 70,000 COP and 80,000 COP per household, once every two months. While this is a miniscule amount compared to what some other Western Governments are offering, in a country with a cost of living as low as Colombia, it may be enough to put off starvation for a few weeks and provide the sustenance that these families desperately need. According to government figures, 800,000 families have already received their first Devolucion del IVA payments.

Those that don’t qualify for La Devolución del IVA or other existing social programs in Colombia are not totally out of luck, however. The Government also announced a “ingreso solidario” which is a program designed to benefit up to three million Colombian households that haven’t received any of the aforementioned state benefits, but are faced with extreme poverty. Victims of armed conflicted, female heads of household and the forcibly displaced are the targets of this social program, which consists of a one-time payment of 160,000 COP.

Another action taken by the Duque Administration to help to alleviate the economic hardship brought on by Covid-19 is to create three dias sin IVA. Decreto 882 outlines how, on June 19, July 3, and July 19, citizens and residents will not have to pay the 19% value added tax that normally applies for the purchase of many goods. In an effort to not have too many people rush to stores, they have applied the exemption to online purchases as well, something not done in the past. The first day falls strategically two days before Father’s Day, which is traditionally a holiday of high consumption here in Colombia. Any expat considering a large purchase can get a fairly nice discount if they plan the purchase for one of these three days.

Additional help for society’s most economically vulnerable came in Decreto 579 which prohibits evictions and rent increases through June 30. This includes those who might be renting for months, weeks, or even days. The order is to be reevaluated closer to the time but for the moment, any landlord attempting a rent increase or attempting to kick out a renter is breaking the law.

WILL IT BE ENOUGH?

The novel coronavirus arrived to Colombia approximately five weeks after it arrived to Spain and Italy – so Colombia had the benefit of watching the horrifying scenes in those countries and bracing itself and preparing for something similar. Stories from the European countries worse affected by the crisis have helped many Colombians to grasp the severity of the crisis and respect the Government’s efforts to combat it. A recent poll found that 92% of Colombians are strictly adhering to quarantine measures, 6.5% say they are somewhat complying and only 1.5% of citizens admit they are not complying at all.

This same poll showed some really positive news for the embattled President Ivan Duque. Between March 20th and April 17th, his Government’s approval rating for handling the pandemic shot from 46% to 75%.

Although the virus has propagated most rapidly through developed countries like Spain, Italy and USA first, many commentators think the developing world will be the worst affected over time. Lack of governmental support and limited health care capacity could push developing countries to the brink as the virus spreads out over the coming months. But while other political leaders in the region such as AMLO in Mexico and Bolsonaro in Brazil were leaving their countries open, denying the severity of the crisis, or firing their own health ministers for encouraging social distancing, the Colombian Government acted swiftly to make changes that international public health experts across the world have assured were necessary. Only time will tell to what extent the benefits of those early actions will have but at least Colombians and expats living in Colombia can feel comfortable about the fact that decisive, science-based actions were taken.

Crime Rates Going Down During Lockdown