These Are Medellín Top 10 Tallest Buildings 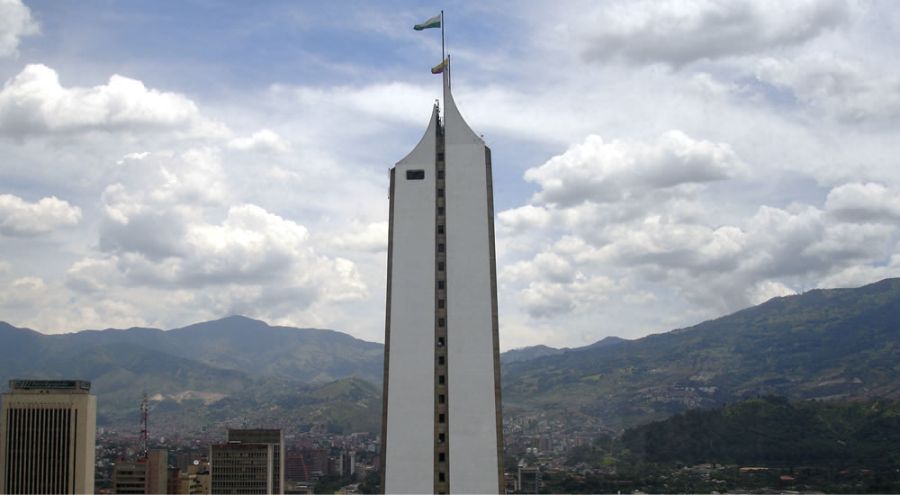 Medellín is a city that grows to new heights, both figuratively and literally. It boasts an eclectic mix of old and new towers, some of which are tall enough to qualify as skyscrapers.  The next time you’re in the Aburra Valley, take stock of your surroundings.

The current profile of Medellin’s skyline is defined by 2 separate building booms occurring in the 70s and one that is taking place today. El Centro, whilst maybe not of the same vigor as it once was, continues to hold some of the city’s tallest buildings, and by a fair bit too.

Conversely, you can observe how El Poblado, a prosperous district, is in the midst of a building boom. Nestled amongst all the green streets are many developments either underway or in the pipeline for the near future.

Medellin’s skyline is continuing to unfold before our eyes!

SE ALSO – List of Comunas and Barrios in Medellín

These Are Medellín’s Top 10 Tallest Buildings

Colseguros is the first insurance carrier in Colombia, founded in 1874. They are are one of the biggest domestic companies with over 148 years of service. Their flagship building in Bogotá stands tall at a whopping 145m. Whilst their tower in Medellín is not quite as tall, it’s nevertheless a commanding building that has influenced the city’s panoramic.

SEE ALSO – A Guide to ATMs and Using Cash in Medellín

SEE ALSO – Music in Medellín: At The Forefront of Progress

Located on the famous Golden Mile (Milla de Oro), the One Plaza Business Center is a project dedicated to offices and businesses. This large building captivates those who see it with its façade, consisting entirely of glass.

Comprised of two connected buildings, the north is the tallest with 21 floors. The southern building has 15 floors of which 8 are dedicated to office spaces.

Given its focus on commercial activities and offices, the building contains a variety of high-end cafes, restaurants and social spaces. All of which promise spectacular views of the Aburra Valley.

SEE ALSO – Interesting Attractions in The City of Medellín

Banco Popular is a Colombian bank founded in 1950. The headquarters is in Bogotá. In the 70s, it joined in on the proliferation of skyscrapers throughout Medellín.

Created in 2015, the Q Concept is an imposing building that contributes to the growing skyline of El Poblado.

The Q Concept is a true feat of residential design. On the 23rd floor, residents can access the sky longue, where they can take in incredible views of the valley.

Certainly not a bad place to stay if you are in Medellín.

In keeping with the ‘Ecocity’ model, the building is surrounded by lush green spaces that are available for all to access. In this sense, it promotes the inclusion of nature within urban spaces and allows for everybody to benefit.

Not only does it foster the recovery of flor & fauna, but this building utilizes vertical panels to reduce solar radiation into the building. This significantly decreases the need for air-conditioning and artificial lighting.

This large building contains 24 floors and hosts a variety of different conventions and events.

Torre Veracruz is a luxurious residential building with 37 floors and 49 apartments, ranging from 215m2 – 459m2. The building boasts 3 ‘intelligent’ lifts. Torre Veracruz is evidence of the impetus to develop in the lavish sector of El Poblado – something that we see in full effect today.

At the time of its construction, the Torre Veracruz was the tallest residential building in the city of Medellin. This title has since been lost to other newer developments.

SEE ALSO – The Inspiring and Transformative Journey Of Medellin

Here’s where things start to get interesting… Clothing, coffee and commerce were symbols of Antioquia’s entrepreneurial dynamism in the 20th century. In the 70s, the three of them would cement their presence tangibly, in a way that would forever change the architectural profile of Medellin’s skyline.

Even today, these grand structures built in El Centro during the 70s: the Coltejer, Café and Chamber of Commerce are still amongst the city’s very tallest. This was all part of an effort to industrialize the growing city, which at that time had met its milestone of 1 million inhabitants.

The bar was to be pushed; Medellinenses were reaching for the sky, and what better way to illustrate that through the erection of unrivalled skyscrapers. Today, El Centro may feel like a gritty place to be, but it was once the hub of Medellin’s economic activity.

Just like other towers built downtown, the Camara de Comercio was a mega display of achievement by the people of this industrious city. A show of unity.

Notice now how all these newer contenders are built in Poblado?. When talking about luxurious properties in Medellin, it’s hard not to talk about Cantagirone.

They emerged as an authority in the development of modern, high-rise buildings. Tre Piu, one of their newest editions to the city, showcases their ambition.  Currently (a strong emphasis here), this building is the third tallest in Medellín. More impressively, this is the tallest residential building in Medellín. Incidentally, the second and third tallest were erected by the same developer, Cantagirone.

Flats range from 275m2 to 517m2. Of course, you can expect all the trappings of a sumptuous building… A heated pool, library, Wellness Center, sauna, steam room, playground and more…

Another example of Medellin’s hard work in the 1970s. This skyscraper took less than three years to build. The Café tower is so tall that it can be considered a skyscraper: it is the 4874th tallest in the world!

Although most of its 36 floors are dedicated to offices, there are also a variety of bars and restaurants inside.

Coltejer is one of Colombia’s largest textile companies, an industry that has driven Medellín’s economic growth for more than 100 years. The building’s peculiar shape is said to mimic the appearance of a sewing machine needle, representing the emblem of the company and the industry as a whole.

The Coltejer skyscraper marked the beginning of the era of tall buildings not only in Medellín, but throughout the country. This mammoth structure has 36 floors, 150 parking spaces, 11 elevators and can accommodate more than 168,000 people at any given time.

Along with the other skyscrapers built in the 1970s, the Coltejer is a true relic of Medellín’s industrious spirit. Although an old-fashioned building among the modern constructions springing up in the Aburrá Valley, these old buildings bring culture and history to La Candelaria and are worth a visit.

SEE ALSO – 8 Epic People That Are From Medellín