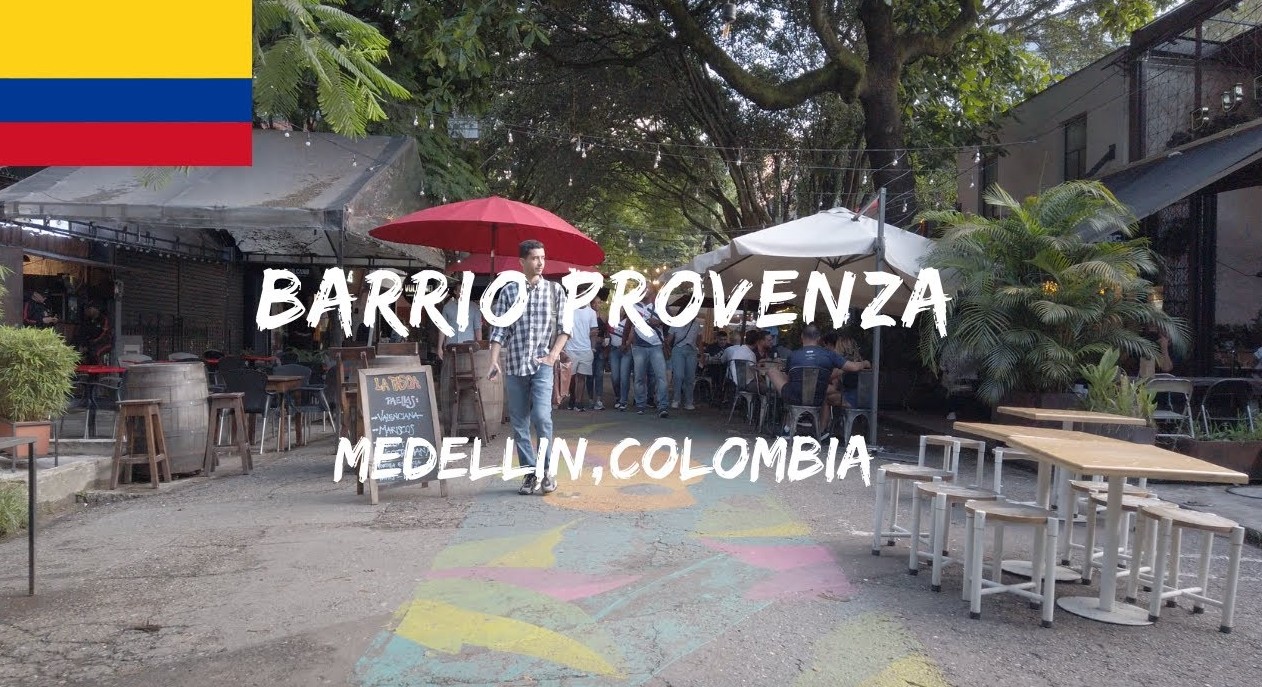 Provenza is making the rounds... there's a hype about it.

Do not conflate the two however. While Parque Lleras has struggled in recent years, Provenza has relished its newfound influx of tourism. It is garnering lots of international attention and guess what?

The secret is out.

This is the epicentre of night-time entertainment in Medellín. It’s growth has coincided with the city’s recent surge in popularity. It is where the local upper crust converge with the foreign crowds for an unparalleled atmosphere & experience.

Did you know that Karol G., one of Latin America’s most prominent singers, released a song named after this neighbourhood? Karol G’s song Provenza has made her Vevo’s most viewed global artist with that song alone generating 547 million views.

Provenza is making the rounds as one of the world’s emerging hip-spots.

Whether you want to soak in the daytime peace or contend with the bustle of its famous nightlife, Provenza offers something for a variety of tastes.

Provenza in a Nutshell

Provenza is located in El Poblado, Medellín’s ritziest and most touristic district.

Its boundary begins at Carrera 37 and extends through the hills up to Carrera 33. Although shaped by the steep terrain of the eastern valley, Provenza is still foot-friendly thanks to the pedestrianization of its streets.

Provenza makes up part of the city’s Zona Rosa; an area of concentrated tourism and commercial activity.

As such, it comes to life at night with a splendour of bars and clubs. Unlike its neighbouring zona rosa, Parque Lleras, Provenza exudes class. It attracts Medellín’s upper-crust in a way that Lleras once could in its glory days.

Don’t think it’s all about the nightlife though. There’s more to Provenza’s repertoire. Although transformational from night-to-day, there is good reason to check out Provenza during sunlight hours.

Before night strikes. The atmosphere is subdued yet vibrant with a host of trendy shops & cafes enjoying good trade.

Tree-lined streets remind you that you’re in a biological hotspot while keeping you shaded from the tropic’s fierce UVs.

Nature lovers are bound to enjoy the tropical biome and variety of birds visiting the area, including a number of hummingbirds.

Provenza is guarded by a large police presence making it a relatively safe place for those that might be giving papaya.

Eclectic, lush, secure, fun… Time Out selected Provenza as the 15th ‘coolest’ street in the world. Yep, it’s with good reason that this is Medellín’s number 1 go-to for foreigners.

The History of Provenza

Although Provenza is characterized by its abundance of bars, restaurants and activities, the neighbourhood endeavours to balance its commercial & residential needs.

The neighbourhood, built in the 1950s, was once nestled within a former farm of Provenza. It was a quiet area with only a modest population. This was in part due to the exodus of citizens seeking space and solace from the density of downtown.

Locals once considered Provenza a remote region, almost too far from the epicentre of the city. The surrounding space was rural and sparsely populated.

Nowadays, the focal attraction of Provenza is its wide commercial offering; its nightlife. In the 50’s, however, the nucleus of the neighbourhood was the Presidential Creek, which at the time was possible to fish.

Due to the challenging slope of the terrain, homes were built in two styles between both sides of the creek: two-story houses on one side and three-story houses on the other.

Inhabitants prized Provenza for its blend of rural and urban features, allowing them to embrace a semi-rural lifestyle.

Its image today juxtaposes against that of its past. Imagine a place where kids rode around the streets safely on their bikes, fishing a mere few meters away from their homes, picking strawberries and other fruits from the former farms.

It was quite the idyllic place to raise a family…

Back then, Poblado was a fraction of its current size, comprised of Provenza, Manila, Lleras, Astorga, Patio Bonito and Lalinde. It was small enough that all  its inhabitants knew each other intimately.

So, how did Provenza evolve from the sleepy place it once was to the vibrant Zona Rosa that it is today?

…Families grew up, times changed, children left and for many of Provenza’s senior residents, it was the ideal opportunity for them to rent out their residences to commercial establishments.

And so it began its transition into a commercial neighbourhood.

Today however, some of Provenza’s finest features have been preserved. It is a lush, tree-lined place that exudes a tropical atmosphere (despite the noise)!

Although it has given way predominately to commerce, there are still residential properties scattered throughout – but they’re scarce and in hot demand.

Provenza is reachable via the popular street of Calle 10. If there’s one street a tourist can recall in Medellín, it’s Calle 10.

That’s because its essentially the spine of Poblado. From the station, it leads you straight up the hill and past the Zona Rosa: Parque Poblado, Parque Lleras and Provenza.

Walking from Poblado station takes 15-20 min but be prepared for a climb of approximately 100m. Follow Calle 10 (diez) straight off the station towards the shiny high-rises of El Poblado.

Taxis are generally the easiest and quickest way to arrive to Provenza. During rush hour, between 6pm – 9:30pm, traffic will grind you to a halt. Calle 10 can experience grid-lock conditions. You’ve been warned!

Food is Exceptionally Good in Provenza

Medellín’s international community is booming with Provenza being its culinary capital.

It is estimated that foreigners make up 40% of its visitors. Here you’ll find an eclectic mix of restaurants representing the best from each corner of the world. The food scene here can contend among the best.

There are many great options all packed in within 5 streets, making it hard to go wrong. Here are however some of our recommendations:

Bastardo Restaurant is nestled in the heart of Provenza (Carrera 35 8a 11) and is enjoyed by many for its open terrace.

The food is international, but predominantly Mexican/Italian. Yep, the menu is large but we would recommend the Nachos & Sangria – they’re well-received.

This ambience benefits from an open design, making it a great place to come with friends.

In my time I’ve found that Bastardo tends to polarize opinion. Some detest the place for its service while others absolutely swear by it.

Nevertheless, it is absolutely worth a visit.

Mistura is a very popular franchise of Peruvian restaurants. On Tripadvisor it has over 90 reviews and a 4.5 star rating.

It’s where I first tried and ignited my obsession of ceviche.

Given the breadth of Peruvian food, the menu is expansive. It even includes a large option of different sushi rolls.

Hands down the best place to feast on authentic Turkish food.

The menu is large with much of its most popular dishes being vegan friendly.

Meat eaters fear not, the chicken shish is scrumptious and contends with some of the food I’ve had in Istanbul.

The food here, in keeping with Provenza’s style, is contemporary and imposes a modern vision of Turkish cuisine. Definitely hip.

Vegan or not, it’s sensible to conclude your meal with a bit of baklava.

Yum. Lezzet Cocina has a 4.6 rating on TripAdvisor.

Did Somebody Say coffee?

Coffee, a natural asset of Colombia. Unfortunately, the majority of the nation’s best produce never stays around for domestic consumption.

Having said that, this does not apply to Provenza. Many of the city’s best baristas and cafes are packed within its streets..

With good reason, Pergamino is the best-known café in Medellín. That’s because they are so much more than just that.

Pergamino work with over 600 allied farmers across Colombia and export their coffee to 20 countries.

Unlike most producers, they don’t export all their best produce. They claim to be committed to the domestic quality of coffee in Colombia.

That is why, three times a week, they locally roast small batches of their best coffee and provide them in their cafes in Medellín!

They claim to hold a high standard both for their coffee and staff. I would agree with this.

It’s a popular place and is generally busy from 12pm – 5pm.

A new spot that has recently opened up – on the same street as Pergamino.

What sets them apart though is that they are the first place serving coffee with CBD.

Mon Rou have enjoyed a positive start to trading, with overwhelmingly positive feedback on TripAdvisor.

SEE ALSO – A Guide to ATMs and Using Cash in Medellín

Although there is much more to Provenza than partying, it is currently the most vibrant place for foreigners to party in the city.

60% of Provenza’s night-time visitors are Colombian with the rest being foreign. The gentrification of the area means that the area is predominately visited by the city’s middle/upper class. The atmosphere is so far unrivalled.

Vintrash (Carrera 35 # 8A-39) is a veteran nightclub in Provenza that has long been the host of Gringo Tuesdays. This begins at 5pm and the setup is casual. Simply order a drink and get socializing.

By 9pm, things start to get a bit more bouncy with people dancing the night away inside.

Teatro Victoria (Carrera 35, 8a-73) is an another popular night club. It has two rooms: room 1 plays reggaetón and hip-hop while room 2 plays Afro/Caribbean-Colombian music.

Teatro Victoria also boasts a lush, plant-filled rooftop where you’ll be able to get a bird eye view of Provenza’s main strip.

On weekends, the club shuts at 4am for those wanting to squeeze out as much of the night possible.

Provenza has dethroned the former king of Medellin’s Zona Rosa. Thanks to its location in the heart of Poblado, nestled beneath the fancy high-rises, Provenza attracts the best of the city’s cuisine, atmosphere and people.

This is, even officially, one of the coolest places in the world and it’s not just thanks to Karol G.

Have you visited? We would love to hear your experience – tell us about it here