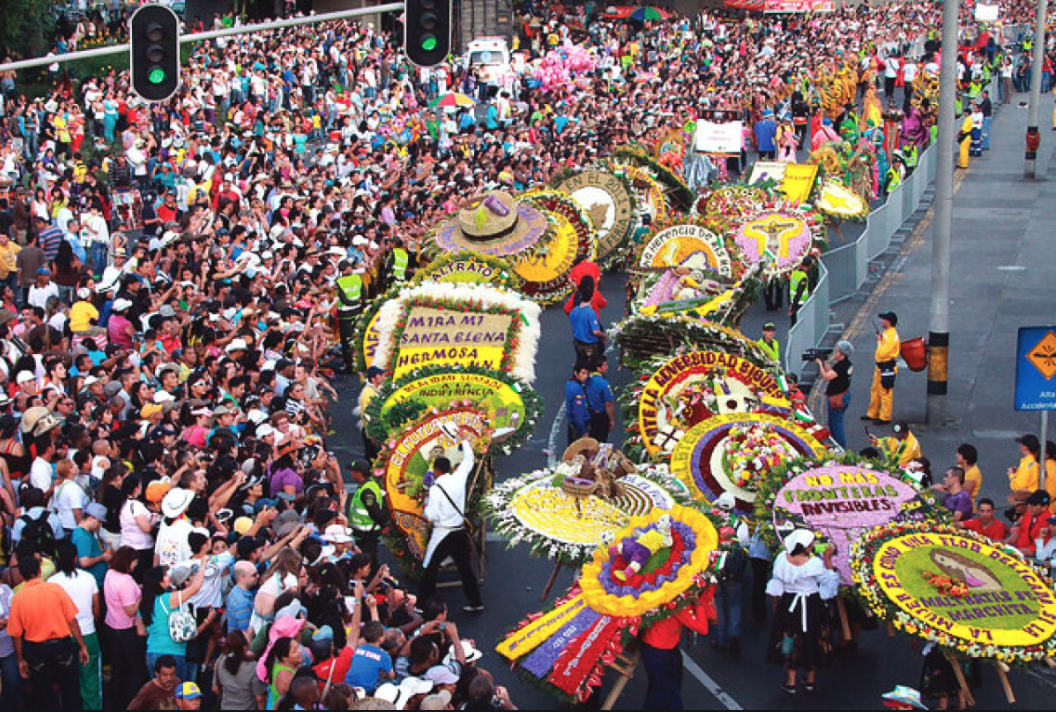 The first version of La Feria de Las Flores took place in 1957, and since then it has grown into an iconic event in the city of Medellín, Antioquia, Colombia. People flock to the city from all over the world, which makes the event a significant driver of tourism and Medellín’s international acclaim. In terms of its importance to the cultural fabric of a city, it rivals the famous Carnival in Rio de Janeiro or Oktoberfest in Bavaria, Germany.

During the colonial era, artisans manufactured wooden structures with handles, which were used as a way of transporting both goods and members of the higher social classes on the steep roads of the Andean mountain range. Later, these wooden structures, called “Silletas“, were used by the peasants who grew flowers to carry large quantities on their backs to bring them into town for sale. Many peasants walked for hours with the Silletas on their backs, most notably from the eastern town of Santa Elena to the center of Medellín. The journey of approximately 22 kilometers is no small feat, as the silletas are large and often very heavy. The economic fate of the family of the person carrying the Silleta (El Silletero) often rested on his shoulders, adding a metaphorical element to this traditional activity. This admirable physical activity is revered locally today – when Los Silleteros arrive for the parade the patrons cheer enthusiastically. It is a local reminder of the ancient inhabitants of the city, and fully symbolizes the hard-working and persevering character of the paisas as a people.

In 1957 under the auspices of an illustrious member of the Medellín Development and Tourism office, Mr. Arturo Uribe Arango, a tradition that has lasted for more than sixty years began. The descent of the Silleteros to the city was celebrated as a festival, becoming a celebration that unites all sectors of the paisa society and that is held regularly in the month of August  every year. The date is chosen to coincide with the celebration of  the independence of Santa Fe de Antioquia from Spain reached on August 11, 1813.

At the beginning of the 20th century, in the month of May with the arrival of spring, it was common for the homes and altars of churches to be decorated with native flowers in honor of the Virgin Mary.

Beyond the Beauty of Flowers, An Industry Thrives

By 1930, the production and export of flowers made the Department of Antioquia the world’s second largest exporter of flowers, after the Netherlands.  More than 1,390 hectares were planted, mainly in eastern Antioquia, which generated jobs for thousands of families in the area. Today, more than 235,000 tons of flowers are exported amongst 1600 different species, with a value of approximately $279 million USD annually. The principal flowers for export are carnations, chrysanthemums, sunflowers, hydrangeas, lilies, orchids, and roses and the principal destination for these flowers are Canada, the United States and Europe.

Silleteros Parade, Classic Cars, and so much more

Before the start of the festival, the Alcaldía de Medellín releases a “programación” for the event. It is a truly impressive document – listing and describing literally hundreds of different events that all take place within the 10 day span of La Feria. Attempting to attend all would be futile, as there are dozens of events each day in places all over the city. The entire month of August is extraordinarily festive throughout the Valle de Aburrá as well, because as soon as Medellin concludes its Feria, the neighboring towns of Envigado, Sabaneta, Itagui and La Estrella commence their own smaller celebratory days.

The Traditional Silleta: It is an icon that represents the old silletas used by peasants to transport their products. It usually measures 80-90 centimeters and they can carry up to 50 kilos flowers on it.

The Emblematic Silleta: The design can be flat or three-dimensional and they seek to bring civic, educational or religious messages to the population.

The Monumental Silleta: They are the largest silletas, reaching up to 2 x 2 meters. In this category, creativity has no limits as they constitute true works of art. Shapes, colors, and textures are mixed.

The Commercial Silleta:  They are authentic mobile advertising pieces, sponsored by companies that want to participate in the parade.

During the festival, the Medellín Botanical Garden opens its headquarters to present a complete and varied exhibition of more than 300 flowering plants from all over the country.  Here, you can hear the chirps of more than 50 different species of birds which are brought in to complement the incredible floral displays.

A Traveling Museum - The Parade of Antique Cars

If you are a lover of classic and old cars, you will be able to enjoy a parade in which cars from different generations are proudly displayed by their owners.The cars criss-cross the city on the day before the main event of the La Feria, and the streets are lined with enthusiastic spectators. Oftentimes, the drivers of the cars will dress in elegant attire from the time period of their cars as well, which evokes memories for the oldest spectators of the Medellín and Antioquia that used to be.

Pedaling to the rhythm of the Bike

Another fun activity, this one geared towards cycling enthusiasts (of which there are not shortage in Antioquia), is to cycle 11 km through various different public parts of the city. Known as “Feria al Ritmo de Bici”, it starts from Parque de Las Luces in El Centro, and winds its way across the city. In 2019, it was estimated that 6,000 cyclists participated.

Highlight For Many - El Super Concierto

Standing in the heat and watching parades isn’t for everyone – and another event is likely more eagerly anticipated by many Antioquian youth – El Super Concierto. Each year, the Medellin stadium plays host to a concert features the biggest names in the Latin American music scene. Past international musicians such as  Gilberto Santa Rosa, Marc Anthony, Juan Gabriel, Oscar De León, Willie Colon, have performed. As for locally grown talent, Carlos Vives, J Balvin, Maluma and Shakira have all made appearances in recent years.

Medellín, the: “City of Eternal Spring”, “The Most Innovative in the World” and “Of Science, Art and Culture”, – these important accolades and designations of recent years are well-earned and well-deserved.

La Feria - By the Numbers

In the years prior to the appearance of Covid-19, it is estimated that this event annually attracted more than two million people to the city, from all over the country and from many different parts of the world. It is the most significant touristic event on the Paisa calendar, and a tremendous undertaking to organize. In 2019, the city invested around $USD 3.6 million dollars in organizing the event, although the returns generated by the city in terms of economic boost would surely exceed that.

The peak of the coronavirus pandemic hit Colombia in August of 2020 – although La Feria can’t be to blame. Many months earlier, the event was postponed until November, marking the first time since the inauguration of the festival that it was not held in August. From November 1 to November 8th 2020, and with a greatly reduced budget, a “virtual” feria was held. The virtues afforded by the internet age meant that anyone could tune into the various parades from the comfort and safety of their own homes. Despite the fact that much of the luster was undoubtedly lost because of the absence of adoring fans lining the parade route, at least the annual tradition was kept and the historic pilgrimage of Los Silleteros from Santa Elena was made.

Medellín - A Destination That Always Blooms

Despite the difficulties that the pandemic has generated at an economic and social level, the city shows its resilience on a daily basis. The Paisa people hope their tourist sector will bloom again soon, just as the flowers do every year during the festivities. The city and its inhabitants are reinventing themselves to move forward in a “new normal” post covid-19, with the same determination and strong personality that characterizes them. These traits transcend borders, so wherever a Paisa goes, they embody the brave and fighting spirit of the original inhabitants of the surrounding pueblos of Medellin whose customs and way of life gave rise to this one-of-a-kind event.

Are you thinking about visiting or moving to Medellin? What are your reservations? Tell us about it.