Is Climate Great in Medellin? Right as Rain it is - Medellin Advisors

Is Climate Great in Medellin? Right as Rain it is 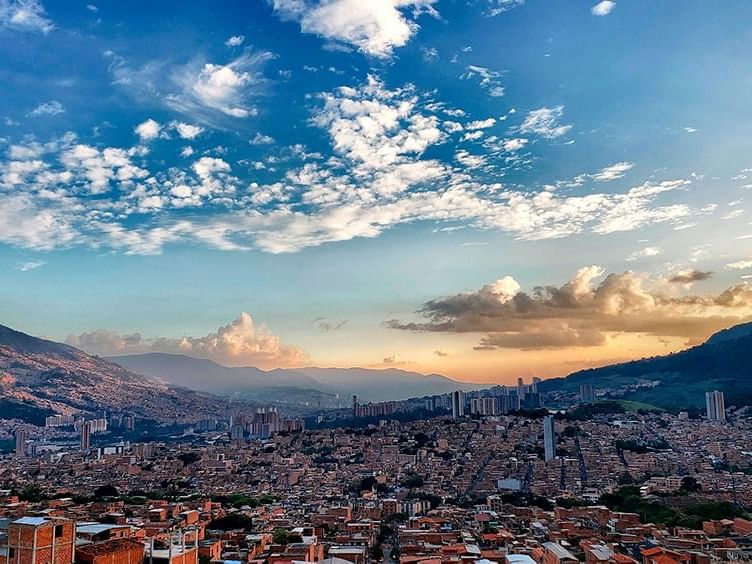 Climate – if one of the vital ingredients to make for a happy expatriate, it’s no wonder that Medellín attracts so many of them with its nickname, the ‘City of Eternal Spring’.

Why come to Medellín?

“The year-long weather!”, is what you’ll be told time and time again…

But is this true? At any given time, glimpse the forecast for Medellín, and you’ll find that almost every single day is marked by thunderous storms.

Did you know that on average, the city receives around, 3000 mm of rainfall per annum? That’s more than 4x the amount in London. Sounds bad on paper, right?

There are few places in the world that share Medellín’s climate. It’s one of the few places that experience lots of rainfall without it being too much of a nuisance. Although, rain is a part of life (quite literally). It’s the nature and timing of it that makes Medellín so liveable.

The day-to-day weather in Medellín is pleasant and dynamic. It’s also what allows Medellín’s landscape to be lush and teeming with ecology.

SEE ALSO – Puebliar: The Best Towns to Visit for a Day Trip or Weekend Away

SEEE ALSO – Interesting Attractions in The City of Medellín

What Kind of Climate does Medellín Have?

According to the Köppen climate classification, Medellín has a tropical rainforest climate (AF). An AF climate experiences high rainfall and high temperatures consistently throughout the year.

A key component of this climate zone is that it is seasonal. This means that it doesn’t have seasonal variations in the way that other climates further from the equatorial belt do. Much like the average temperature, the hour of sunset is consistent year-long. There is no sense of polarity felt between long, hot summers and cold, harsh winters…

Simply put, equatorial zones at or close to sea level are hot and humid year-round. Also, they produce high amounts of rain.

Interestingly, people often refer to the seasons of Colombia as the wet or dry seasons. Yet, the majority of its territory falls under the AF climate, meaning that it rains enough each month of the year to call them the ‘wet & wetter’ seasons.

Medellín is unique; it is gifted by the geological phenomenon that is the Andes. Thanks to its altitude of 1,495 m+, the city is cooler than other tropical cities closer to sea level.

In this regard, Medellín avoids the issue that some have with living in the tropics. This is one of the key reasons why Medellín is considered such a liveable city.

In the graph below, observe that the average high temperature is 27°C temperature in Medellín is roughly 16 °C.

SEE ALSO – Adventure Sports in Medellín and Beyond

The Role of Altitude in Medellín's Climate

Unlike many tropical cities, Medellin has a climate that is comfortable. Curiously, when thinking of paradise on Earth, we often conjure up images of tropical islands with swaying palm trees. But, in Colombia at least, many foreigners looking to settle are drawn away from the coastal cities because of their stifling heat. Cartagena is an excellent example of this. It may be Colombia’s biggest tourist attraction, but it’s Medellín that attracts more nomads & long-term visitors.

Cartagena is great for vacation when there are ample chances to cool off near the pool/beach. Living there though, away from the beach, having to actually crack on with things?

Not for me. It reminds me too much of Florida!

Over the 8 years that I have been coming to Colombia, I’ve noticed that foreigners typically favour Medellín because of it being a more ‘liveable’ city, with climate playing a large factor in that assessment.

Worth pointing out is that there are numerous tropical cities throughout the globe. Few of them though, are located 1,500m up in the sky.

That means you get to say goodbye to the stifling humidity and hello to the cool mountain air that regularly sweeps through the valley.

A Land of Multiple Microclimates

El Valle de Aburra, which contains the greater metropolitan area of Medellín, is home to multiple microclimates. This is again thanks to the different altitudes that are present within the valley.

At the basin, neighbourhoods such as Laureles and El Centro are notably hotter than areas that cling on to the slopes. In the higher parts of El Poblado and Envigado, temperatures can be some 2 – 5 °C cooler than areas located within the basin of the valley.

This is best illustrated by concurrently observing the forecast for two different places within the valley. Despite being in proximity to one another, the difference in altitude provides for 2 different experiences.

Also note – neighbourhoods located at the basin are subject to more pollution and this can contribute further to heat variations. El Centro, thanks to its population density, feels significantly warmer. This is the heat island effect and can be unpleasant.

This variation provides another layer when deciding where to live throughout the valley.

So... It Rains a Bunch in Medellín?

It rains over 4x more in Medellín (excluding the greater Metro area) than it does in the entirety of London. Now, given London’s connotations as a perpetually grey and drizzly city, that sort of data could ring the panic alarms.

But don’t let it…

The nature of rainfall couldn’t be more worlds apart.

In the UK, like many other temperate regions, rainfall tends not to be concentrated. It falls slowly, drip by drip, over what feels like every minute of the year (slight exaggeration).

In Medellín, however, rainfall patterns are typically short, sharp and local. Also, a lot of the downpours tend to be during the night/early morning hours.

This means that in most cases, rainfall is not too disruptive. Of course, when it does rain you’ll want to find some cover – quickly, too!

When it rains in busy places like El Centro, people often wait it out with the expectation that it will soon stop. It usually does!

Even during rainier months, it is normal for the bulk of the day to be sunny/overcast, with a short but heavy downpour. After the showers dissipate, the sun often returns to quickly brighten up the day again.

Furthermore, it is completely normal for one part of the valley to be sunny and warm whilst another part experiences an intense storm.

N.B – Extreme weather events are not uncommon in Colombia. Medellín is sensitive to climatic patterns such as El Niño and La Niña. Mudslides, droughts and violent storms are not unusual.

In Medellín, annual precipitation totals somewhere around 2,400 mm-3000mm. Compared to London’s modest 600 mm per year, it would be easy to think Medellín’s weather is miserable. This isn’t helped by forecasts, which are almost always inaccurate. Given the fast pace of atmospheric change, forecasters will normally provide a conservative prediction and say that it’ll rain.

Fortunately, the reality on the ground (and sky) is very different. Do not be put off by what your forecast tells you, nor what certain data indicates.

When are The Wetter Season?

I’ll repeat: there is no truly ‘dry’ season in Medellín.

The driest months typically span through December to February. June to August are also relatively dry.

In my experience, a lot of this rain falls in the later hours of the day. Rain can however fall at any time, so be prepared with an umbrella.

SEE ALSO – 11 Reasons You Should Have Moved to Medellín Yesterday

SEE ALSO – Interesting Attractions in the City of Medellín

This year has brought harsh weather conditions to Colombia.

Hundreds of Colombians have died and thousands more left without homes. Sadly, 2022 has struck the nation with record-level rainfall, affecting over 75% of the territory. This includes Medellin and its surrounding areas.

In the past 10 months, the country has registered 5-6x more rainfall than in previous years – according to an article by The Guardian.

Why is this happening?

According to some experts, this is a result of  La Niña, a cyclical weather pattern that emerges within the Pacific Ocean.

Although it is a normal weather phenomenon, global warming appears to exacerbate both the frequency and intensity of this cycle.

And yet just 2 years ago, the region was grappling with severe droughts which had seen places like Guatape dry up to 35% of their capacity.

Regardless of its sensitivity to climatic changes, the weather in Medellín continues to attract people from all corners of the globe.

If like most of us, you are coming from the northern or southern hemisphere, the climate is likely to both surprise and please you.

There are few places on the globe that boast a tropical climate 1,500 m above sea level. In Medellín, you can relish the steadiness of a sunny climate whilst avoiding the pitfalls associated with the tropics.

Yes, it does rain in Medellín, but it usually isn’t overbearing in the way that you may expect. Showers tend to be heavy but quick. Thanks to the tropical atmosphere, it’s not uncommon to experience sunshine and rain concurrently. These kinds of events can make for quite the spectacle.

In exchange for this precipitation, you’ll be rewarded with lushness at every corner. Medellín boasts more biodiversity and flora than most over cities in the world, with only some cities in the tropics, such as Cali, able to top it.

Thanks to the ubiquity of slopes in the valley, travelers are spoilt for choice in terms of climate. For those wanting a slightly cooler climate, it may be a good idea to seek out higher altitude areas such as Poblado, parts of Envigado or Sabaneta.

Finally, you should not be deterred by what forecasts may tell you. The reality on the ground is too complex to be accurately depicted in advance. The best way to find out is to come yourself. I’m sure you’ll fall in love with the City of Eternal Spring; I know I did.

0 thoughts on “Is Climate Great in Medellin? Right as Rain it is”