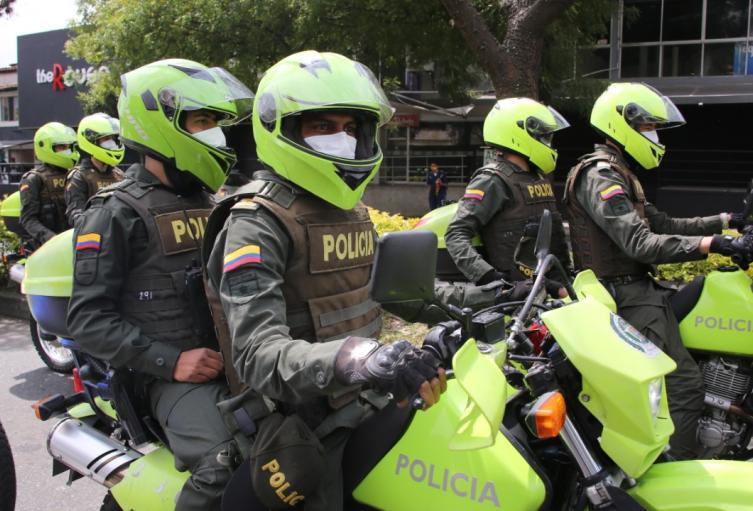 It’s no shocker though; safety is still one of Medellín’s biggest barriers to tourism. Although the sector is expanding, Medellín continues to be stifled by the horrors of its past.

Reputation can be a stubborn old thing; although Medellín’s magic is no longer a secret, the city still has a long way to go before realizing its full potential for international tourism.

Things aren’t perfect, of course. This spicy South American city needs to work relentlessly to overcome its adversaries, many of which are no stranger to the continent.

Still, Medellín has big ambitions to become a hotspot of the Latin world; it should be held to adequate standards… Safety is an important facet that people, especially those from ‘safer’ countries, will want to stay current on.

At Medellín Advisor, we don’t want to pump fear, nor do we want to provide a false sense of security to our readers. As it is an area of intense interest for expats, we’ve written frequently about the topic:

For this year (2022), we got in touch with La Secretaria de Seguridad y Convivencia to give us a lowdown on what’s happening. With the use of current government & non-government data, we will give you a better understanding of crime and safety in Medellín (as of mid 2022).

Let’s begin with the facts & figures for the city’s most pertinent crimes.

SE ALSO – List of Comunas and Barrios in Medellín

The figures below are provided by the Office Secretary of Medellín’s Town Hall (government). This is the official data used by the city to inform strategy and decision-making.

Upon contacting the Secretary of Security & Co-existence, we were able to pull up data for the following metrics of crime:

We hope that these may help you to quantify the safety level of Medellín. In tandem is the need for context – numbers don’t paint the entire picture.

When studying the data, some readers may be thinking about how the true number of robberies is much higher, due to those that go unreported. While it is undoubtedly true that many robberies go unreported, there is no reason to think that the percentage of unreported robberies changes significantly over time. So the data, especially when compared to previous years and comparing between comunas, can still paint a helpful picture of what is going, and where.

Scroll down for data.

Data for homicides in Medellín (mid-year 2022)

So, to really see how the situation is now, it is necessary to compare the current figures with previous periods. This will allow us to analyze what the trend is for the end of the year.

The figures for 2022 include the first 6 months of the year. The rest are annual records.

Below are some salient observations based on the graph:

Medellín’s four comunas with the highest # of homicides so far in 2022 are:

According to El Espectador, La Candelaria’s staggering death count is attributable to territorial disputes, illegal housing and narcotics. For foreigners avoiding these activities, their chances of becoming a victim are significantly lowered.

SEE ALSO – Puebliar: The Best Towns to Visit for a Day Trip or Weekend Away

SEE ALSO – The Inspiring and Transformative Journey Of Medellín

Distribution of homicides in Medellín (2022)

Using the same data, we have formatted a pie chart to better see the distribution of total homicides amongst the tourist friendly neighbourhoods (Jan 1 – 05 July, 2022):

As the pie chart shows, the three most touristic neighbourhoods of Medellín experienced only 11% of all total homicides for 2022 (mid-year).

By contrast, a high concentration of this year’s murders have occurred within the 1 comuna of El Centro (22%).

The most tourist friendly neighbourhoods in Medellín are, as expected, the least likely for murder to occur. These areas are also the highest patrolled by security & police.

The data corroborates that if you stick to the right areas and avoid risky activities, your threat of being murdered is low.

SEE ALSO – 11 Things You Should Avoid Doing in Medellín

Over half of all car thefts for 2022 took place in just 6 of Medellín’s neighbourhoods. This reveals a disparity with El Poblado experiencing 2% of all the city’s car thefts.

Conversely, the other two neighbourhoods popular with tourists – Laureles & Belen – accounted for 22% of all car thefts.

Generally, foreigners are less affected by this modality of crime as the prevalence of drivers remains low.

SEE ALSO – Music in Medellín: At The Forefront of Progress

Medellin's tourist neighbourhoods continue to be hotspots of robbery

El Poblado, Laureles & Belen are the city’s three comunas most inhabited by tourists. They have all the trappings of a modern, comfortable and upscale neighbourhood. Unfortunately, this makes them ideal for thieves and robbers.

Together, they account for 32% of all robberies occurring in the first-half of 2022, a figure that is disproportionately high.

This year (2022) is on course to exceed the number of hurtos reported for 2021, suggesting that economic pressures, such as inflation, are mounting.

Understandably, this may concern foreigners as robberies are the type of crime that they have the highest chance of becoming a victim of. Even though the numbers are alarming, the risk remains relatively low. Remember, 100,000s of annual visitors come to Medellín without any issues. Furthermore, there are ways to mitigate this threat. Read below for some essential tips.

Colombia's crime rate continues to drop from the 90s

Medellín is not the only city in Colombia that has successfully fought against crime.

The nation has come a long way since the 1990s with results that speak for themselves. Here is a 20-year change in Colombia’s crime rate provided by Macrotrends.

Let’s be clear – Colombia still has its problems. Inbound travellers should be more vigilant here than in let’s say, Western Europe or Canada.

Having said that, this 20-year downward trend is impressive. Compare it to countries like Venezuela, Mexico, Sweden or even the US where crime is on the up.

Crime & homicide rates may have dropped from international records but that doesn’t mean that they’ve been subdued entirely.

Contrarily, petty crime is an obstinate feature of life in Medellín – that can and does weigh on some people over time, especially if they’ve been victims themselves.

SEE ALSO -11 Reasons You Should Have Moved to Medellín Yesterday

This is what The Guardian had to say 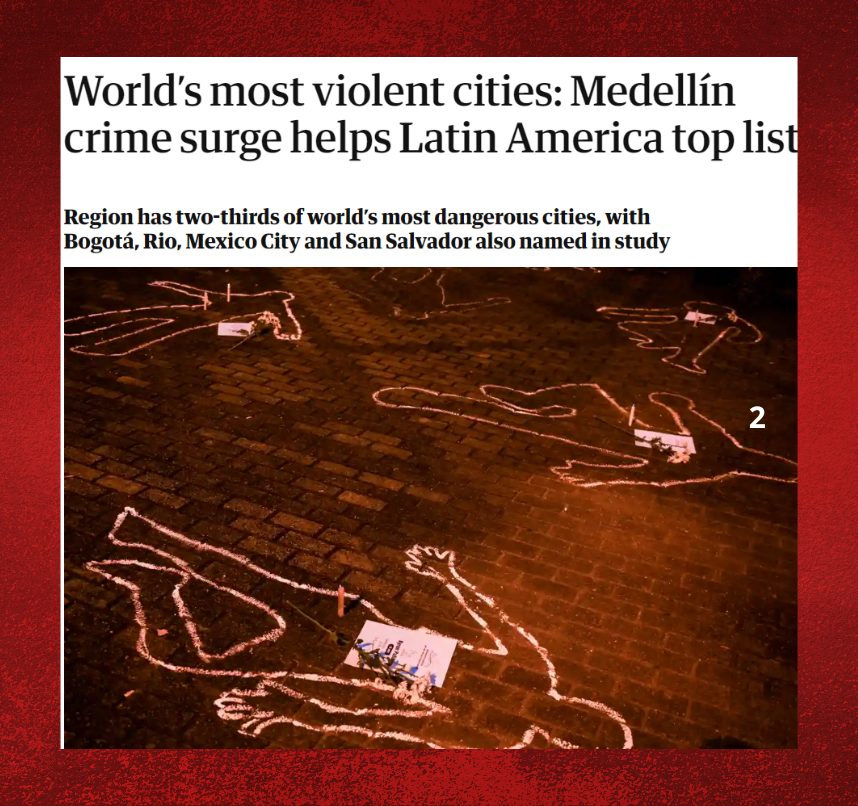 On May 28, 2022, The Guardian published a sensationalist article titled,

I say sensationalist because Medellín is regularly indexed as one of the safer cities of South America, with Numbeo placing Medellín as the 138th most crime ridden city of 2022.

Two-thirds of the world’s most dangerous cities may be in South America, but Medellín is not one of them. In fact, according to indexes provided by Statista & Numbeo, Medellín sits lower than a number of cities in Australia, Canada, the US & Europe.

Other than citing the horrific murder of a high-profile DJ, not much else is mentioned about Medellín to justify the use of its name in The Guardian’s provocative title. Rather, they briefly state that the city obtained the highest possible risk score in Verisk Maplecroft’s analysis without substantiating any reasons why.

A “crime surge” in Medellín is relative and this alone is hardly what tips South America off as the most dangerous continent. South America is home to the world’s deadliest cities – Medellín, as substantiated by data, is not in the same league as those other cities.

The Guardian’s title is not only misleading, but also damaging. It’s the kind of sensationalism that continues to hinder Medellín’s progress on the international stage.

SEE ALSO – Interesting Attractions in the City of Medellín

My observations of crime & safety in Medellín

Over the years, I have observed that:

Your odds go up modestly over time. I have a handful of friends that have been robbed at some point or another during their +5 years. Some even multiple times.

I mention this not to scare you, but rather for you to adapt, because that is what is required.

To live without the stress of crimes in Medellín: never take out onto the streets what you aren’t willing to relinquish.

Overwhelmingly, foreigners that die during robberies in Medellín are those that were willing to die for their possessions, either by fighting back or resisting.

I will never do that. You shouldn’t either. As horrible and wrong as it is, I consider robberies to be a provision of living here in this affordable city. I don’t mean to paint the picture that you will get robbed – I have been coming to Medellín for 6 years without incident.